There are genetic changes in our DNA that explain, in part, obesity. Scientists continue to study the topic to find more answers. In this article we explain what the advances are and how they affect the treatment and prevention of obesity. 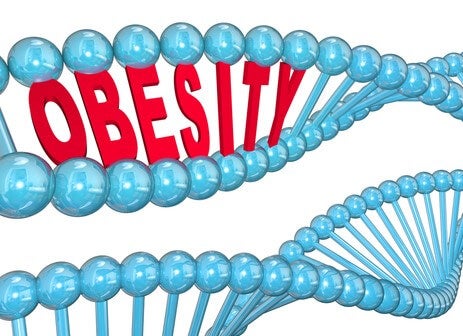 Historically, we could say that the history of the obesity gene dates back to 1962. The scientist in question is the geneticist James Neel, who postulated a hypothesis in this regard, which is still debated to this day.

James Neel wondered why a disease mainly associated with obesity, such as diabetes, had been perpetuated over time. The logical thing would have been that humans with this condition did not increase throughout the history of humanity.

To explain why diabetes continued and more and more people are affected, he proposed the existence of a gene. This gene would serve the human species to overcome the stages of famine, which were frequent in prehistory. Through the ‘thrifty gene’ humans would accumulate extra fat to survive in times of famine.

According to James Neel, this obesity gene made sense in those moments of humanity. As history evolved, and there were fewer and fewer stages of generalized hunger in the world, the accumulation of fat became obesity and also a higher frequency of diabetes.

What was an advantage for our ancestors, and the possibility of survival, today is a disadvantage in an increasingly urbanized world, more sedentary and with greater availability of foods rich in fats and sugars?

Obesity is a huge global problem. There is talk of a pandemic, that is, an epidemic that spreads throughout the world, crossing geographical borders.

It is classified as a chronic disease. The basis for its definition is the excess fat tissue in the body. The measure that doctors use to determine obesity is the body mass index (BMI). BMI is calculated using a formula that divides body weight in kilograms over height in meters squared.

Statistically, 22% of the world’s adult population suffers from obesity. Some estimates are larger and estimate that a third of the world is obese, or at least has an overweight problem.

It is not only an aesthetic situation, far from it. Hence the importance of locating something like the obesity gene. Obesity is associated with other diseases such as diabetes and high blood pressure, in addition to affecting the quality of life causing:

The current discovery about the obesity gene.

In 2007, a new discovery was made about the obesity gene. The scientists identified the FTO gene as associated with obesity. The experiments showed that, if this gene is defective, the body tends to store more energy than to use and burn it.

However, the genetic problem does not explain all obesity in all people. About 44% of Europeans carry it; not even half.

Other recent studies explained in more detail how the obesity gene alters the levels of a body hormone called ghrelin, better known as the hunger hormone. If the FTO gene is altered, ghrelin overreacts, making high-fat foods more palatable.

Can genetics be reversed?

Scientific studies also agree on something: the obesity gene is not the only factor involved. The lifestyle is more important to determine obesity, among other things. And also, the lifestyle is modifiable.

These are some points that we can take into account to combat genetics from what we have control over:

Genetics will continue to investigate, but we are still far from drugs that can regulate the FTO gene and the ghrelin hormone. The obesity gene exists. However, it is not the only determinant of a person’s overweight. Lifestyle, exercise habits and a healthy diet are the true pillars of obesity prevention and treatment.

The Memory Of The Skin

The consequences of iron deficiency

Causes of tingling hands and legs

The Human Being As A Superorganism