Today it is known that the newborn’s microbiota plays a very important role in the development of its immune system. This microbiota begins to form in the uterus, but has a decisive advance after delivery, thanks, to a large extent, to breastfeeding. 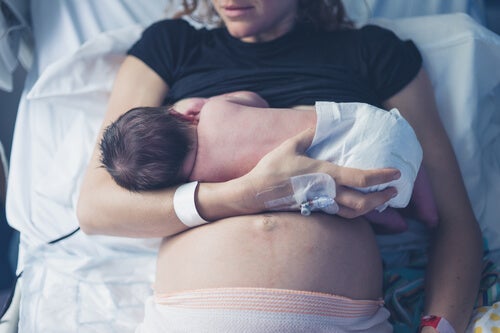 The microbiota of the newborn is a topic that has been gaining importance in recent times, since it has been discovered that it plays a fundamental role in the maturation of  the child’s immune system and in the regulation of the intestinal mucosa.

In turn, an adequate immune system is essential for the normal development of the child. Today it is known that the microbiota of the newborn plays a decisive physiological role in organic balance. Likewise, a determining relationship has been established between the microbiota and the so-called atopic diseases.

Today it is also known that the way to reach the world conditions the composition of the newborn’s microbiota; that is, it changes depending on whether the delivery is natural or by cesarean section. Feeding with breast milk or formula milk also has a decisive impact on this aspect.

The microbiota comprises all microorganisms that are in the intestine , the uro-genital tract, and the nasal and oral cavities. It is estimated that in the intestine alone there are about 38 million bacteria, of 1,000 different species. The microbiota was formerly known as intestinal flora or microbiological flora. Its composition is varied and specialized, depending on the area of ​​the body where it is located. These microorganisms interact with our body and carry out some of its functions.

The composition and distribution of the microbiota are also closely related to food. Currently, the link between this microbiota and some atopic and inflammatory diseases is being thoroughly studied.

The newborn’s microbiota is already present to some extent before delivery, but it is at birth that it begins to develop. If the birth is natural, the baby acquires a flora similar to that of its mother’s vagina. If it is born by caesarean section, the microorganisms reach it through the mother’s skin and even from doctors.

In addition, the child is born with an  immature immune system, which begins to develop precisely thanks to the microbiota. Microorganisms provide the stimulus that the body requires to activate the immune system.

Such stimuli are captured by receptors that are on the cells of the immune system and that recognize the bacteria, viruses and fungi that make up the microbiota. Thus, a series of biochemical signals are unleashed that lead to immune tolerance, that is, to the absence of an immune reaction against these microorganisms. If something goes wrong, inflammation occurs.

It was previously thought that the fetus did not have any microorganisms in its body while it was in the womb. The most recent research has reevaluated this idea. Today it is known that the microbiota begins to form from the placenta and amniotic fluid. At the time of birth, there is a process of maternal-fetal microbiological transfer. Afterwards, the intestinal colonization of the newborn begins. This is a dynamic process, influenced by various factors such as the type of delivery and the diet the child receives, among others.

At the beginning of life, after birth, there is also a process of competition between the microorganisms that will be part of the microbiota and the pathogens. The abundance of nutrients is decisive for the establishment of the intestinal microbiota. If it is consolidated, it is able to fight pathogens.

Breastfeeding and the newborn’s microbiota.

Breast milk also plays a determining role in establishing the newborn’s microbiota. This provides the new body with immunological factors, as well as prebiotics and probiotics, among others. All this together regulates the colonization of microorganisms in the baby’s body.

Likewise, it was found that the children of mothers who consume fermented foods and give their baby breast milk, are less predisposed to suffer from certain atopic diseases, such as asthma and food intolerances.

On the other hand, it has been pointed out that alterations in the establishment of the microbiota increase the risk of suffering from diseases such as obesity, diabetes and various types of allergies.

The signals that our hands give us

6 causes of neck pain that you often overlook

The lung preservation system for a transplant

The presence of nitrites in the urine

Vaginal flaccidity and its 4 causes

5 causes of vaginal itching that you should not overlook

The obesity gene according to science