The neurons of Von Ecomo represent a fascinating field that is just beginning to be understood. They are present only in the most sociable and intelligent species. Apparently, higher cognitive and emotional functions depend on them. 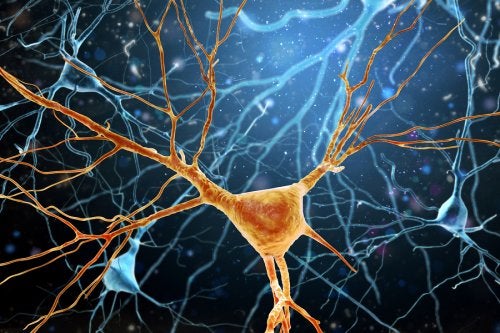 The neurons of Von Economo are attracting the attention of science more and more.   Although they were discovered since 1925, it was only until the 21st century that they began to be studied in depth. In fact, very little is still known about them, but there is a certainty that they are determinants in the human brain.

Von Economo neurons are known to be rare. The human brain has around 100 trillion neurons and only between 200,000 and 400,000 are Von Economo. They are also known to be three times larger than normal neurons and also faster.

The most recent studies indicate that Von Economo neurons are a kind of “conductor” of our brain. This means that they do not act against a specific organ or function, but rather determine the way in which the brain should act. They do not produce thoughts, but they do make it possible for them to be generated.

What are Von Economo neurons?

Von Economo neurons are a specific type of neuron. They are found in very limited areas of the brain: the insula and the anterior cingulate gyrus (ACC). They are also called “spindle neurons” and are only present in humans, humpback whales, killer whales, bottlenose and risso dolphins, Asian and African elephants, sperm whales, belugas and fin whales.

The first description of Von Economo neurons was made by Constain Von Economo and they bear that name in her honor. He first mentioned them in his work the cytoarchitecture of the cortex of the adult human being. This neurologist and psychiatrist also owe the description of encephalitis lethargica.

This scientist pointed out that they were neurons with a different shape from the others. He noted that they were elongated, spindle-shaped, that is, cylindrical, elongated and narrower at the ends. He also indicated his location. It was after the year 2000 when they began to be studied in detail.

Thanks to the computational mappings of the brain, these neurons began to be studied in detail. Von Economo was found to be present in hominids for 15 million years.  There are more abundant numbers of these neurons in human and great ape brains.

In humans, they appear during gestation, approximately at week 35. Their number increases gradually until 4 years of age. The first eight months of life are the time when its development occurs most quickly.

At birth there are a similar number of these cells in both hemispheres of the brain. Then they tend to be more numerous in the right hemisphere. These neurons have receptors for dopamine, vasopressin and serotonin, substances closely related to human behavior.

So far it has been established that Von Ecomo neurons are involved in the formation of the self or identity, decision-making, social connection, concentration, and supervision of other areas of the brain.

They also perform a complex and fundamental function. It consists of comparing the signals that arise from the brain itself, with the signals that are perceived by the senses. That is, they provide us with what we call a “sense of reality.”

Due to their size, these neurons communicate rapidly with large areas of the brain.  Scientists believe that deficits in their functioning are related to problems such as autism and dyslexia. They also believe that these cells could explain the emergence of that entity we call “mind.”

Everything indicates that Von Ecomo neurons influence healthy social connections, as well as processes of self-awareness. A study carried out by neurologist W. Seeley at the University of California found that there was damage to these neurons in those with frontal-temporal dementia.

This is a disease in which those affected lose all capacity for empathy. They are erratic, insensitive, and lose a sense of responsibility, even with themselves. Seeley did several autopsies on those with the disease and found that, on average, 70% of Von Ecomo neurons were damaged.

Other neurophysiologists, such as Naomi Eisenberger and Cole Steve, have pointed out that social connection has a powerful influence on health. Those who are well connected with others have fewer illnesses and tend to live loger.

The presence of these neurons in highly social animals reinforces the idea that these neurons determine sociability and the processes associated with it. As a curious fact, the use of psychedelic drugs inhibits the activity of the areas where these neurons lodge.

What is torticollis and what are its causes?

Symptoms of drowning after swimming