The human being is composed of a physical structure, the body, and a component based on consciousness and identity. What few know is that we present thousands of living beings within us that make us superorganisms. 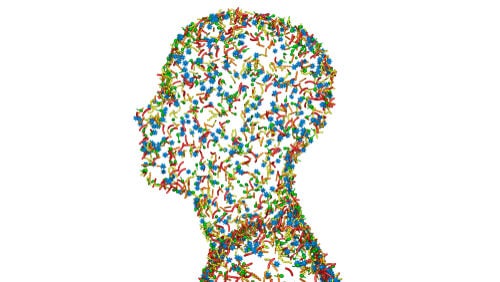 We all know that the human being contains living beings inside his body. Intestinal microbiota or specific viruses, among others, are examples of microorganisms that come and go, varying their concentrations and their presence in us over time. Still, what few understand is that man could be classified as a superorganism.

But what do we mean when we talk about superorganism? It is a complex structure that is the sum of all the tiny particles that make it up. We will understand it better below.

What is a superorganism?

The word superorganism is used in biology and ecology to summarize a way of looking at the nature of society. It is normally applied to structures generated by animals, such as those of some eusocial insects.

For example, an anthill can be considered an entity in itself, as it has some elements of its own such as the following:

In this case, the living beings that inhabit the anthill and the physical space they occupy would form the superorganism in question. This term may be fuzzy, but is well understood by examples from nature. Still, things get complicated when we try to apply the definition to the human being.

Are we the sum of all our parts?

To address this complex idea, we are going to draw on a study published in the journal Medical Hypotheses. This review article contains several essential ideas for understanding the different components of the earth:

It is dizzying to imagine the number of bacteria that must be scattered across the globe to generate so much matter, right? Well, the data becomes more incredible when we quantify the presence of microorganisms in the human body:

These figures are, to say the least, impressive, but we will see the importance of bacteria with a specific case below.

Bacteria and our gastrointestinal system.

The clearest example that humans are a superorganism made up of billions of bacteria that perform different jobs is perfectly seen if we look at the intestine.

The human small intestine is considered the most populous microbial ecosystem.  It adds more total bacteria than those present in the rest of our body. This makes our gastrointestinal system a virtual organ that is not held back by its own physiological limits:

This idea by itself makes us realize that we are, in part, the sum of the living beings that inhabit us. Something as basic as such food and we know it today would not be possible without our microbial populations.

Superorganism: a question of genes.

Thus, humans do not only contain their own genome inherited from their parents. The DNA of each of the microorganisms that live with us is also part of us. Under this statement the challenge posed by a recent branch of science called metagenomics is generated.

This discipline is in charge of identifying, understanding and genetically sequencing the bacteria that inhabit our body and allow us to perform such important functions. It is essential to obtain information about these living beings that accompany us to understand ourselves.

Thus, as we have seen, the human being could be considered as a superorganism. We are the sum of our physical structures and identity, but we also have to bear in mind that without the microbial populations that inhabit us, life would not be possible as we know it.

The 7 most common fractures in people

The pH of urine, what is it?