The gut microbiota has a great influence on the health and well-being of a person. It is like a trace of identity, since it is different in each subject. Currently, there are man    unanswered questions in this regard, but investigations continue. 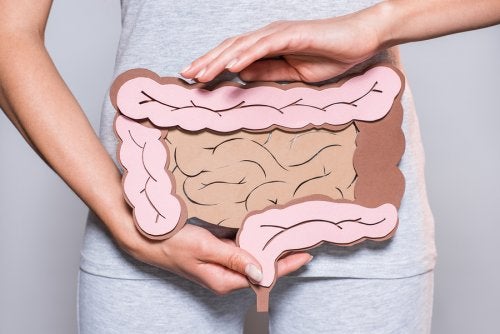 Whenever we talk about the microbiota, we refer to a group of microorganisms. These can inhabit different parts of the body such as the skin, the mouth, the vagina, among others.  Therefore, the term intestinal microbiota refers to the set of microorganisms that inhabit the intestine.

The intestinal microbiota was formerly called “intestinal flora” or “intestinal microflora.”  Many experts treat it as a “new organ”, which performs key functions in maintaining good health. At the moment it is known that it is closely related to growth, immunity and nutrition.

It is believed that alterations in the gut microbiota could shed light on such complex issues as obesity and asthma. There are also indications that it is related to gastrointestinal disorders such as irritable bowel syndrome and celiac disease.

What is the gut microbiota?

As already noted, the gut microbiota is the population of microbes that are housed in the gut. It comprises 100 trillion microorganisms, within which there are at least 1,000 species of bacteria. These have about 3 million genes. The intestinal microbiota can weigh up to two kilograms. Only one third of the microbiota is common in humans. The remaining two-thirds are specific to each person. The Human Microbiome project has identified only 30% of the gut microbiota.

Microbiota alterations are called “dysbiosis” and are associated with various diseases. Currently, many scientists around the world are working to decipher the genome of the microbiota and understand the extent of the influence of this new organ.

The microbiota begins to develop from the moment of birth, since the intestine of the fetus is sterile within the mother’s womb. The composition of the microbiota in the baby depends directly on the way it is fed. Its development is believed to stabilize around 3 years of age.

The gut microbiota continues to evolve throughout life. Its balance can be affected by multiple factors and, therefore, the microbiota of an older person is considerably different from that of a young adult or a child.

The importance of the gut microbiota.

Many experts see the intestinal microbiota as a “metabolic organ”, due to the influence it exerts on nutritional functions, the regulation of the immune system and on systemic inflammation. All of these functions are currently under investigation.

It has been verified that the microbiota helps the body to digest some substances that the small and large intestines are not able to process. It also influences the production of some important substances, such as vitamins B and K, and contributes to maintaining the integrity of the intestinal mucosa.

On the other hand, the microbiota acts as a natural barrier against pathogens, which is why it is essential in the functioning of the immune system. Also, it is believed that there is a close relationship between microbiota imbalance and Crohn’s disease.

Other data of interest.

Diet characteristics and genetic factors have a decisive influence on the composition of the intestinal microbiota. A study carried out with mice showed that with just one day of change in diet, the microbiota in the animals was also transformed. In general, mice on a Western diet gained weight rapidly.

At the beginning of life, there is a significant difference between the microbiota of babies who are breastfed and those who receive formula. Everything indicates that this factor has an important impact on the development and balance of the microbiota in the future.

In the first two years of life , bifidobacterial predominate. From the age of 3, the microbiota begins to diversify and reaches its maximum complexity in the adult organism.

In 1989, Strachan showed that there was a reduction in microbial load in developed countries, due to high standards of hygiene. This is believed to precipitate the increase in immune diseases.

Symptoms of drowning after swimming

The human being as a superorganism

The obesity gene according to science

The 7 most common fractures in people

6 causes of neck pain that you often overlook

Symptoms that can warn of vitamin deficiency