Premenopause is accompanied by abrupt changes for women. Therefore, it is advisable to know your symptoms and seek medical and gynecological attention if necessary. Find out more about it. 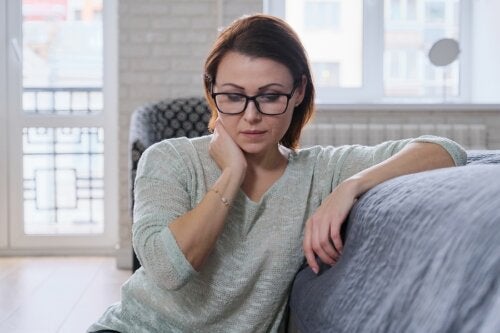 Menopause does not mean that life has ended, but that a new stage has begun. However, what happens when it arrives early? This time we want to talk about the symptoms of premenopause.

But, first of all, it is convenient to differentiate the menopause itself from the climacteric, since many women confuse these processes. Although they are in a relationship, these terms are different. Let’s see next.

Menopause refers to the definitive disappearance of menstruation for an approximate period of twelve months, due to the failure of ovarian function. When this occurs before the age of 40, one begins to speak of early menopause.

The climacteric, on the other hand, is the time during which one passes from reproductive to non-reproductive life, as indicated by medical research. The medical literature also highlights other guidelines to differentiate these moments:

“The cessation of ovulation and endocrine ovarian functions in women under 40 years of age”.

It is worth noting that this term, ovarian failure, was proposed in 1942 by Fuller Albright, considered the father of endocrinology. It was the first time that this phenomenon was mentioned. Other scientific journals also mention the different words to refer to ovarian loss.

In any case, following the definition of the health expert, Muntané, we will call premenopause:

“The time of life before menopause, in which women undergo biological changes that can cause a series of disorders. Externally, one of the manifestations of these metabolic changes is the absence of the rule itself, and internally, the cessation of ovulation”.

Although the terms do not have exact precision, it is possible to recognize some signs to determine whether or not you are facing premenopause.

If the period does not go away, for at least 12 continuous months, a diagnosis of menopause cannot be established. However, if you observe some of the symptoms listed below, you are likely experiencing premenopause. If so, the recommendation is to see a doctor.

How to deal with premenopause?

Being in the premenopausal season can be difficult to cope with. However, this is a natural process that we should not fear. In general, another stage begins in which you can even live without pressure. From the age of 40 there are other risks associated with health that are worth taking care of, such as:

The best thing you can do at this point in your life is to see the doctor, since he will be the one who will do a balanced analysis of your family history and will determine what is best for you. Perhaps he will indicate some treatment to alleviate the discomforts, as well as it may be that he designs an ideal diet for you.

In any case, remember to avoid smoking, lead a life with healthy habits, take vitamin D and calcium supplements, in addition to dedicating a few minutes a day to the physical activity of your choice.

The connection between the spine and the other organs

The first symptoms of premenopause