Drowning after swimming and secondary drowning involve the inability to breathe from fluid accumulated in the lungs. Knowing your symptoms will allow us to act in time. Only then can we avoid greater evils. 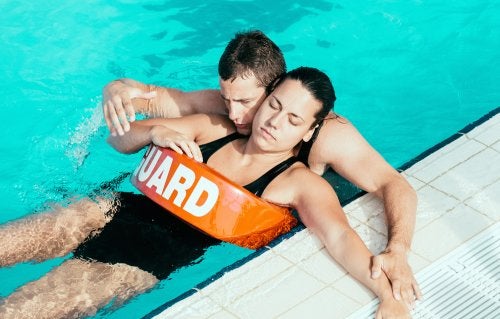 It may be that hours after a near-drowning experience, signs appear that should be addressed as soon as possible. It can be a drowning after swimming or a secondary drowning. Both types of drowning occur out of the water. Next, we will discuss this little-known risk in detail so that, if necessary, you are in a better position to avoid its serious consequences.

There have been cases of people who, after having lived a traumatic experience in the water and, even after having overcome it, present symptoms that have sometimes triggered death. Many of them have been children. We are talking about drowning that takes place out of the water. It can occur hours or even days after drowning with resuscitation, but always as a consequence of what was experienced during the dive.

Dry and secondary drowning primarily affect the lungs. And, in the long run, to the basic functions of the body, therefore. It is not our purpose to cause unnecessary distress or concern. Rather, we want to make known the signals emitted by the body in the event of an incident of these characteristics. Thus, you will be able to be alert, to, if necessary, resort to a medical service immediately.

What is secondary drowning and why does it occur?

According to a study carried out in the USA, 75% of these cases occur in children under 5 years of age. It can also occur in adults who have experienced an incident in the water or who have faced sudden currents. When a person experiences an episode close to drowning, it can happen that the water penetrates, before the vocal cords close and prevent its passage towards the interior. The result is pulmonary edema.

As there is water in the pulmonary alveoli, they cannot exchange oxygen through the blood and the heart slows down. Drowning can occur up to 76 hours after the initial drowning. There are cases whose symptoms have manifested even after three days.

Symptoms of drowning after swimming.

As we can see, many times it seems that everything is going well after the person has gotten out of the water, but this may not be the case. Therefore, it is essential to be attentive to the following symptoms:

What to do when some of these symptoms appear.

In the event of drowning after swimming, it is essential to see a doctor urgently.  This will take the necessary measures. If, after the examination, it is diagnosed that it has been a mild drowning episode, it is most likely that only observation of the patient is advised.

If, on the contrary, the picture is more serious, a chest X-ray will be indicated, to rule out edema. Administration of oxygen may also be considered.

If it is a child, supervision is very important. Children should not be left alone in swimming pools or in the sea. While playing in the water, pay special attention to their movements to prevent them from swallowing water abruptly. It is also advisable that in the first four years of life, the child learns to  swim and loses its fear of water.

If it were an adult who had suffered an incident while swimming, it is necessary to observe him for the next 72 hours, counted from the drowning episode. Remember to pay attention to the possible appearance of the symptoms mentioned above.

Know and observe to help.

Water games and swimming are leisure activities typical of summer. However, they are not without danger. This is why it is so important to know the symptoms of drowning after swimming. Being alert will help us prevent enjoyment from ending in tragedy. Knowledge is the first step to help other people and help ourselves in situations of misfortune.

What is torticollis and what are its causes?

Breathing through the mouth: causes and consequences