Lumbar disc herniation is characterized by pain that is centered in the lower back and can radiate to the legs through the sciatic nerve. 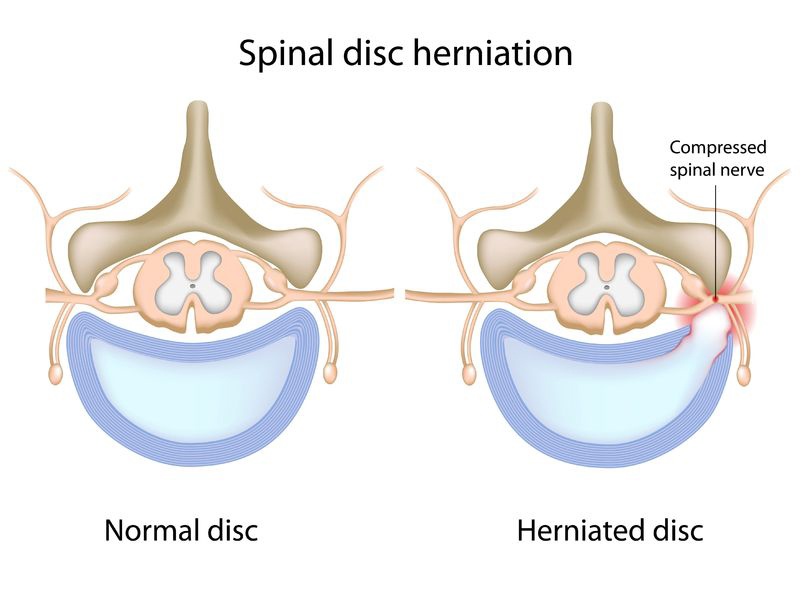 Back pain is very common. It can be caused by stress, muscle contractures, poor movements and, in some cases, by a herniated disc.

Although it is estimated that 20% of the population have a herniated disc, in most cases they do not present pain, at least for some time. However, when discomfort appears, the pain can be disabling.

“The affectation depends on the level of compromise of the nerve ending. Basically, it depends on the pressure or the inflammation that causes the hernia ”, explains Dr. José Macchiavello, from the Column Center of the El Conde Clinic, in Chile.

How does a herniated disc occur?

The spine is a complex of anatomical pieces made up of vertebrae, intervertebral discs, muscles, ligaments, joints and nerves that can occasionally give us problems.

The vertebrae are aligned along the back and separated from each other by the intervertebral discs, whose function is to cushion the impact of the movements of the spine.

These discs are composed of a soft texture with a hard-outer coating. Sometimes the disc can tear or open, causing the soft tissue inside it to move and press on a nerve.

Why do we suffer from herniated discs?

The disc herniation can occur over the years by wear of the column, by injury or sudden movement to the lifting with the body or suddenly turn.

First, the pain caused by a herniated disc can affect different parts of the body, depending on where it is located.

When should you seek medical help?

The pain caused by any type of herniated disc makes normal life activities difficult. It is difficult to walk normally, work and carry weights. It may even cause discomfort when sleeping and pain when sitting.

If these symptoms last several days, a doctor should be consulted for the pertinent tests to obtain a diagnosis. Doctors recommend going to the ER if you have  urinary incontinence or bowel control.

In this case, the hernia is hampering the normal functions of the body and the condition must be treated immediately. However, most cases improve with simple rest, physical therapy, or anti-inflammatory medications. Only 10% of patients require surgery.

Although the appearance of a herniated disc is unpredictable, specialists recommend following certain rules to avoid its appearance.

Symptoms that can warn of vitamin deficiency

Causes of tingling hands and legs

The Risks of Sedentary Lifestyle for the Heart

The rhythm of the heart can be disturbed by overwork

The consequences of a lack of iron