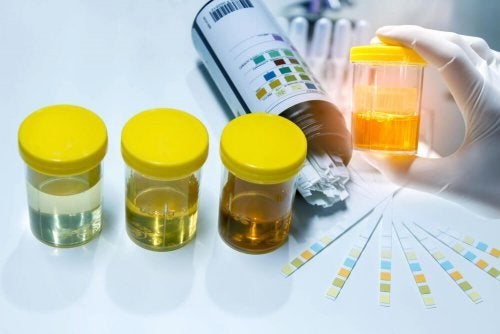 Protein in the urine is sometimes a sign that the kidneys are not working as well as they should. In principle, this condition does not generate any symptoms and is only detectable by a urinalysis. Therefore, most of the time it goes unnoticed in the initial phases.

We all have protein in our blood. These play a very important role in the body, since they help to configure the bones and muscles, as well as to control the amount of fluids in the blood and prevent infections, among others. However, these do not have to pass into the urine.

When there is protein in the urine, abundant and persistent, it means that the kidneys are making an incorrect filter. They should process and remove waste and not protein. It is considered an early sign of kidney problems, which should be taken care of.

There is always some amount of protein in the urine. When its volume is low, it is considered normal. In fact, there are some circumstances in which the presence of a large amount of protein is not considered abnormal. This rises, for example, after exercising or due to an infection, especially in young people.

Protein in urine tells us about a health problem when its levels are persistently high. This condition is called proteinuria, if there are no other abnormalities in the urine. It is almost always a sign that there is some kidney dysfunction that has not yet been detected.

The presence of a high volume of protein in the urine is more common in people with hypertension or diabetes and in those with a family history of kidney disease. However, anyone can have this symptom.

Proteinuria has different causes and that is why its characteristics vary considerably from one case to another. As noted above, initially it does not generate any symptoms. It is common for the first signs to appear when a kidney problem has already evolved.

In these cases, symptoms such as decreased urine production, fluid retention that causes inflammation in the ankles, fatigue, dizziness, vomiting, lack of appetite and unpleasant taste in the mouth may appear. One of the most common symptoms is foamy, soapy urine.

The normal way to diagnose proteinuria is through a urinalysis. There is a rapid test, which is done by dipping a strip into the urine. If it changes color, it means that there is a high amount of protein in the urine. A chemical analysis can also be done, which is more detailed.

As already explained, in some occasions the cause of proteinuria is some transitory circumstance. This can be a great physical effort, presence of fever , extreme external temperatures or even emotional tension. In these cases, kidney function is only temporarily altered.

In severe proteinuria, the most common cause is glomerular disease. This is related to an abnormality in the glomerulus, which is a capillary network that acts as a filter in the kidneys. Glomerular disease is sometimes caused by diabetes, lupus, pre-eclampsia, and other health problems.

Moderate proteinuria is usually caused by abnormalities of the renal tubule . In other cases, the factor that triggers the problem is the phenomenon known as “overflow.” This occurs when proteins have a very low molecular weight and easily pass through the kidney filters.

Treatment of proteinuria depends on the cause of the problem. If it is caused by a secondary disease, it must be treated so that the presence of protein in the urine ceases.

Most commonly, medications of two types are prescribed when the underlying disease is diabetes or hypertension.  The first are the so-called “angiotensin converting enzyme inhibitors”, known as ACE, for its acronym in English. The latter are “angiotensin receptor blockers,” or ARBs.

Both drugs are often prescribed when the underlying disease is diabetes or hypertension. However, even if these health problems are not present, such drugs are also ordered to prevent kidney damage. In any case, the presence of protein in the urine is always a reason for medical consultation.

Why do I feel a ringing in my ear? Discover its causes and solutions

The consequences of iron deficiency

Breathing through the mouth: causes and consequences